I had a little adventure today.

Maybe not an adventure, but a great day.

I saw a post on Facebook asking for someone to help out a local shelter by picking up a dog and taking her to her new home. I volunteered; I thought it was a little way of helping out.

When I woke up this morning, I regretted I had volunteered. I thought it was a quick drive, but it was a couple of hours. John was unhappy that I was missing work for the morning, so not a great start.

And then the shelter where I was picking up Hazel had this sign on the gate:

“Saving the life of one animal may not change the world, but the world will surely change for that one animal.”

And the people around them.

So my spirits picked up. They picked up more when I heard the enthusiasm in Carole's voice when I said I was bringing the dog to her.  I thought Hazel, my terrier/pit bull co-pilot for the day, would be timid, terrified, and shrinking from everything. Instead, I met this sweet, loving soul: 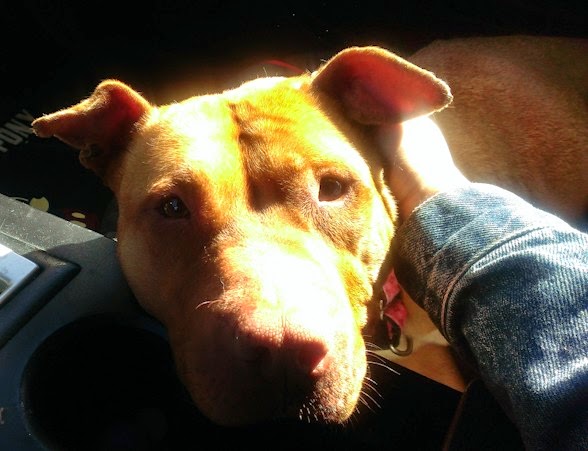 Far from timid and scared, Hazel greeted everyone with love and happiness. Despite all the hardship and abuse she had at the hands of human beings in her past, she gave us all another chance. I said to Carole later on, "She's a better person than me."

You know how much a dog has affected shelter volunteers when they come out to say goodbye. Hazel was hugged and kissed as she rolled over to get her belly scratched. As she licked hands and thumped her tail, I said, "I can see where your breed gets it's terrifying reputation."

She never barked or cried, just wagged her tail and came with me happily, jumped in the car and immediately settled in. I stopped for gas once where she charmed all the attendants around her, big huge men who whispered sweet things to her and reached in the window to scratch her ears.

When we got close to our destination, I put the top down on the car and pulled in with Hazel sitting prettily in the seat, nose up catching the breeze. She met her new people with big thumps of her tails and a large smile.

So, a few hours in the car and I was a part of brightening the world of a handful of human beings and one dog.  It picked up my spirits so much. (And I'll make up the lost hours.)

Hazel is at PAWS Montclair where she will get her weight back up. I don't know if she will be put up for adoption or if Jenny is keeping her. If she does go up for adoption, you would be foolish not to snatch her up. She is an angel, smaller than a full pit since she has terrier, sweet disposition, and gentle with everyone. You can also keep an eye on their Facebook page.

Thank you, Hazel, for a perfect morning. 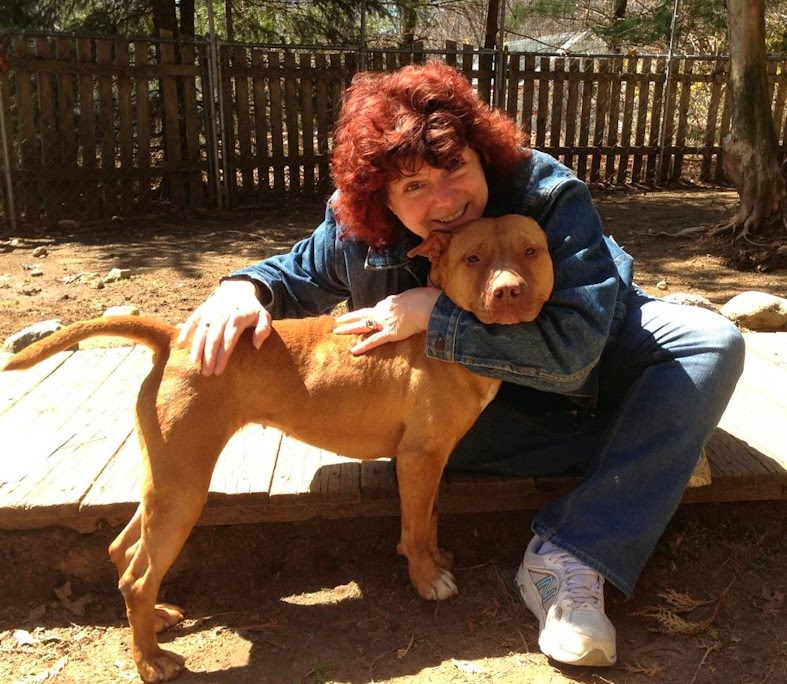