Dreaming of a Little Dog.

When I was a kid, I had a few dreams where my dad would show up alive and tell us how he had to pretend to die, but he was back now.  When I lost my mom, I had weeks of dreams where she would come into a family party; we would know she was gone and also know this spirit of her didn't know that, and tell each other/threaten each other not to do anything that would tell her that because she'd have go away.

Now, I've had two dreams where Casey comes back to me and it really surprises me.  I've never gone through this with one of the pets.  But there I am, in the first one, out on the deck on a beautiful day and I hear her bark. I look frantically around until I figure out where the sound is coming from and I rush to the edge to look down.  Out she prances with that spectacular step she always had, like a little Lipizzan stallion, I used to say, from underneath the deck. She immediately knows where I am and looks up, little stub of a tail wagging furiously and another happy bark.  I can't get down the steps fast enough to go scoop her up.  Casey, somehow well and alive.

I just had the second one recently.  I'm playing tug with the dogs and hear her, turning around to see her happily shaking a toy into submission.  Playing with all the energy and drive she had until last year, and I'm so thrilled to see her that way again.  I don't even know that we've lost her, I only think about how I can't wait to tell John how she's back to being the young, vibrant Little Dog we adore.

I figure it's either my subconscious just dealing with the loss I can still feel keenly, especially in moments that were special for us.  When I let the dogs out in the yard for the last time each night, what I started jokingly calling "One Last Pee" at some point, I don't remember why. But I would call her and joke around, even making up a little song to the tune of "One Last Kiss" from Bye, Bye Birdie.  Last summer, on a gorgeous evening with fireflies and Casey enjoying walking around with the other dogs, I sang the song like always and danced around in the grass, just enjoying the mood.  When I turned around at one point, she eyed me with an expression of "You have severely lost it."  I laughed and told her I had, picked her up with her immediately settling into her regular spot in my arms where I carried her each time in and out of the house after she hurt her neck.

I know Casey was special.  She was our little 2 pounder.  The puppy we weighed in the bird feed scale at Petco because she didn't register on the dog scale.  Our cat herder. Star of children's shows.  More bravery, confidence, and courage than so many people, maybe anyone I know.  She went to sales shows with John, traveling the Cape May ferry, and miles of ground at his side.... eating Crustable peanut butter and jelly sandwiches as her road treat.  She always rode shotgun.  She had the most unique relationship with John, utterly trusting him including playing a game called "Bounce" where he'd bounce her like a ball on the bed, and yet when he told her to do something, she'd consider it and then lick his nose in amusement, like "You're so cute.  You thought I'd do that, didn't you?"  She faced Great Danes and any other challenge, knowing she was smaller, but never letting it stop her because if the fight is worth it, then you take the battle on, even if you could lose.  Casey never gave up, never backed down to anything, not even old age. Her bark was deeper than Elphie's who has a broader chest, deeper than Daytona's who is bigger and male.  She loved a good Kahlua and cream, drinking them when Gerry and I had one when we lost Mom, and once got into some Baileys Irish Cream with Morgan and Elphie, who immediately fell asleep after 2 drops, while she looked from them to me with an expression that said, "Lightweights".  (I should say here that we didn't give her liquor.  These couple times she got into it, we snatched it from her when she got a couple licks and prevented it happening again. Although my sister Gerry would joke, sending emails when things were going rough saying, "Tell Casey I'm coming down with a bottle of Kahlua" for a relaxing weekend.) She was so independent, she'd head to bed or back to the car or wherever else when she had enough, figuring you'd catch up sooner or later and knowing you understood that it didn't mean she didn't love you.  She'd blend in with the black & white throws on the couch, watching calmly as we looked around for her, including outside, calling her name.  And as one dog expert said the perfect toy dog should have, she owned whatever ground she walked on and you knew it when you saw her.  It was her world, and we were all lucky to share it.

Last year, the vets said they could see her going to 20 and no one ever believed she was as old as she was.  I really thought she would be here longer....

My aunt found the perfect card to send us: Goodbye to your friend and shotgun rider... In heaven, the car windows are always down.  And a friend of John's had a card made up with the Rainbow Bridge poem, filled with pictures of John and Casey sharing the road and the journey together. She always was Daddy's girl and lived for the moments he spent giving his time and focus to her.

I was the one to take care of her when she was sick and, in the last couple years, to help with the older age. I got up in the night when she needed to go out and placed the water bowl where it was easy for her.  When we got afraid of her going up and down the deck steps because her neck injury made it tough for her sometimes, I was her legs.  When she got tired on walks but still wanted to see her world, I picked her up as I walked the other dogs.  People laughed at the site (Who's walking who?!) and I'd say she was retired now and I was her ECV scooter.  When John suggested having her sleep in her crate at night instead of next to me where I could feel when she wanted out, I veteod it.  However many days, months, years she had left, she'd live them the right way, even if it meant getting up at night because some day, I would beg heaven to give her back, even if it meant getting up every hour.  And I always made sure she kept her spot sleeping next to John or laying on his side, for both their sakes: for her, to have those moments with her favorite person in the world even with younger Rico now pushing his way into that spot.  And for John, to have the memories to hold close when she could never be there again.

That last day...  John had gotten her this fake lamb wool blanket when she was a little puppy.  I wrapped her in it, took her out and let her sniff all the autumn smells, saying "Look at your yard.  You kept it safe for 17 years..." and I just held her.  I took her to the camper to her spot in the window where she always sat to watch out over her world, where we have a Disney dog sticker to mark it as hers. Where I made a bed of pillows so she could lay there again last July on what ended up being her last trip. I promised the sticker would stay there. She barked at something she heard, but I could feel her body failing.  When it was time, I stood with her one last time on the steps, letting her sniff around, then got in the car, letting her watch the house and neighborhood she protected and lived with us one last time.


I know she was special.  But I'm still surprised by the dreams.  I never had them for Morgan, who I loved and who adored me.  Not for Saavah or Rufus...  why now? As I said, I figure it's my subconscious dealing with the loss.  People who very spiritual say it's her coming back to let me know she's okay.  It's true that I regretted having her put to sleep and cried to John that we made a mistake.  Maybe that's it.  Maybe it's that Casey signifies the end of a special era in our lives.  I don't know.

But it's good to see her. 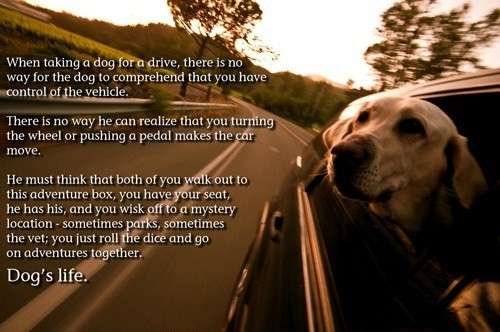