Which means Happy Anniversary to John and I!  To celebrate being married all this time, we cleaned out the gutters and raked all the leaves off the front yard.

Just kidding.  We went out to dinner last night and then a movie, spending time together just the two of us.

Since this is the holiday based on the Harvest Festival, I brought in the goodies.  A big mountain of candy, and now I'm supposed to give it up when these little guys show up?

We've already had a bunch of kids, but there's plenty of candy left. Looks like the people at John's office will get treats tomorrow.... but they won't miss this little Snickers bar.... or this Reese's cup... or...

RiffTrax Live: House on Haunted Hill is tonight with a special guest Paul F. Tompkins as a riffer for a new short. Get your tickets here! http://j.mp/axQbQA

"There are many reasons why you should go see this performance, the main one of which is laughter. But here are a few more in case you’re one of those ridiculous people who won’t just up and do something because they’ve been told:

Because, Seriously, How Bad Does This Sound?
“Classic low-budget, horror B-film House on Haunted Hill features eccentric millionaire Fredrick Loren and his fourth wife, Annabelle, who have invited guests to a haunted house party. The deal is, any guest who stays in the house for one night will win $10,000. The only problem: they’re all trapped inside with a bunch of ghosts, murderers, and other terrifying entities!”

Paul F. Tompkins
One of Paste‘s comedians you should follow on Twitter, funnyman Paul F. Tompkins is one of the best stand ups working today. He’ll join the trio “as a guest riffer on a classic, never-before-seen short.” If previous RiffTrax live performances are to serve as any indication, the shorts are worth the price of admission alone.

Because You Loved the Twilight RiffTrax
The only thing funnier than watching Twilight is watching these guys make fun of it. Check out their compilation below and just try not to go tonight."

...you're not getting enough exercise."

That's how the quote goes. We could get away with it before. Morgan had the greatest metabolism. I wish I had HALF of hers! I wouldn't put on a pound! Casey can easily stay trim with the right food management and Elphie used to tear around the yard with Morgan.

Poor Rico, however, is like a lot of us: he looks at food and gains weight. In trying to keep his weight down, Casey's dropped because he'd try to get hers. So, I finally paid attention to the quote, realized my saggy butt could use the exercise too and started walking the dogs regularly. I tried to go each weekday at least, but if nothing else, several in the week.

Elphie has no problems with her young age and stocky build, but I have to watch Rico because being out of shape means he can't do a lot yet.  Yesterday, John joined us and we pushed it a bit far. I will say, those dogs slept well last night!

I also have to watch Casey who will turn 17 in a month. She goes as far as she wants and gives me the look that says "That's it." I scoop her up and carry her, letting her down at the park and other stops where Elphie and Rico signal the smells are good.  So she gets some exercise, keeping her fit, and I get some upper body work during the walk with her in my arms.  ;)  She settles against me when I carry her, head held high so she can still check out everything with her same old pride and bearing.  After all, it's her world, and she's letting us use it.

We were coming home this way a week ago when a couple pulled up in their car. Seeing Casey being carried, they joked about who was smarter.

"She's retired," I explained, "and I'm her electric scooter."

Email ThisBlogThis!Share to TwitterShare to FacebookShare to Pinterest
Labels: dogs

Rifftrax LIVE with a Vincent Price movie this Thursday!

I can't wait! I love going to these. They always give a great night with lots of laughs. The ticket price is very affordable and with all they give you between the night itself and the shorts movie and other goodies in downloads, it's cheap and a great buy.

Seriously, if you ever enjoyed Mystery Science Theater 3000 or want to try a new type of comedy, come to see it on Thursday.

And if you can't make it Thursday, definitely check out the Rifftrax site.  It's not just old movies, they do the new ones too.  Clash of the Titans, Jaws 3, High School Musical, and The Boy in the Plastic Bubble are the latest ones out.  And you have to see the shorts: I highly recommend my favorite, One Got Fat.  It's a bicycle safety film for kids narrated by the narrator from Fractured Fairy Tales, Edward Everett Horton.  It's $1.  Trust me, it's worth more than that.
Posted by Erin at 3:09 PM No comments:

Not because of the leaves falling or the date or because the acorns are dropping so fast, it looks like a bad Rambo spoof as my dogs dodge and weave around the mini-bombs as they run to the house.

It's because of these! If you live in my region, you know these cookies well.  They're only out at this time of year, usually the same time that apple cider hits the shelves.

They're not as "spicy" as ginger snaps, a different balance of spices, and CRISP!  They're perfect for dunking and very popular.  I brought some to John's office and they were gone within minutes!  I also get a box for my friend Laura in California; I sent her some last year and she really liked them.

Viewing and funeral in the next couple of days

This is where reality sets in.  No more thinking it's unreal.  After all, Ralph was sitting up and talking about the Phillies a week ago.  Last Wednesday, I held his hand and talked about him coming home.

I'm running around, taking care of last minute stuff including directions for some people, so it seems surreal that I'll be in the funeral home in 2 hours.

It's the end of special time in my life.

Got to get ready. To quote Bette Davis: "Fasten your seatbelts. It's going to be a bumpy night."
Posted by Erin at 5:05 PM No comments:

LOLDogs: because we can always use a laugh

Email ThisBlogThis!Share to TwitterShare to FacebookShare to Pinterest
Labels: loldogs

I'm so churned up with feelings. Ralph was so good to us for so many years and we had a lot of good times. He also helped Mom to get us through some bad ones.

But after we lost her, and he believed his one daughter that I stole things, lied and... it doesn't matter. We settled things after awhile, but it was strained after that. In time that eased a bit; we'd see each other at family things or I'd be with my sister Cathi. But it wasn't the same. I didn't just go over there like I used to or call. And when I saw him or his kids, it was about how they lost Mom, how they were affected, never words for how was I and my family doing.

When he went into the hospital, I went with my sisters to see him. I prepared to see him ill, but I didn't expect how his face lit with joy when he saw me, the tear in his eye, the way he gripped my hand, never wanting to let me go.

I saw him several times in the hospital, always holding his hand, and when he was awake, making sure he heard me say I love him, that we all did, and that I knew he loved me and everyone in the family. And I'd kiss him when I left.

So now I hurt that he's gone, hurt for the good days we had, guilt that I didn't go to him when things were strained and fix that, and glad that I saw him to hold his hand, see him happy when he saw me.

I was going to scan the pictures of the two of us from my wedding, but the guilt is too much.

Here's to my Penguins of Madagascar buddies...

... especially my new ones: Jacob, Sam, and Jocelyn.

The new Penguins of Madagascar DVD comes out today! 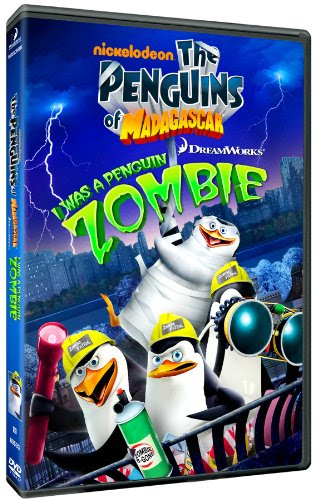 Penguins Of Madagascar: I Was A Penguin Zombie!

It has not only that great Halloween from last year, but a brand new episode that's never been out before!

Plus 6 more episodes! And even though we have them recorded, we all know we want this DVD, even for just the new episode!

So you go bug your mom (she probably wants it too) and I'll see who has it in my area! With luck, we all be watching it tonight!
Posted by Erin at 12:38 AM No comments:

Email ThisBlogThis!Share to TwitterShare to FacebookShare to Pinterest
Labels: penguins of madagascar

A simple little memorial for a lost pet

A simple, silly memorial for our dog Morgan that happened by accident. This little dog got put up there by the window haphazardly as I putted around the room. 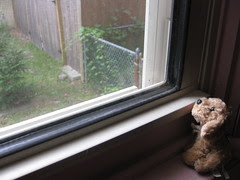 The morning after we lost Morgan, I found it had been turned around as I dashed around getting Morgan to the hospital. It struck me, that look to the sky....

It said so much about my own feelings.

I've never moved it and he's in the same position to this day.

Her simple, little memorial.
Posted by Erin at 4:32 PM 1 comment: