Mr. Softee just made their first trip of the season down the street!

And just like last year, Elphie howled like a wolf when he went by. She must really want ice cream!

I wrote an article for our animal shelter newsletter.

It's called "The Great Cisco Rescue".  You can read it here and scroll down on the first page.  If you do read it, I hope you enjoy it.  :)
Posted by Erin at 3:58 PM No comments:

...I got a picture message from John.  This one:

Someone had abandoned this dog in the woods. He made his way to John's co-workers house. He asked me if Oasis would take him in; if necessary, we would foster. That's how we met Rico. 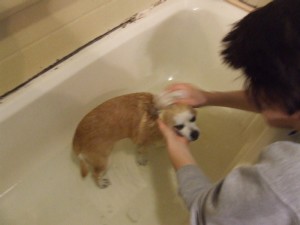 After a lot of phone calls and research, we tracked down his original owners.  Meanwhile, we called him Rico and started the process of gaining his trust.  His toenails were so long, he limped.  He was scared, dirty, and exhausted.  He was even glad for a bath that washed away the dirt and coldness of being abandoned in the woods.

He wouldn't let us pick him up for awhile and he wouldn't come to us for pets.  Too many people had left him; he was afraid we were the next ones.

When he collapsed that night, he wouldn't move from the spot where I put him, like that alone would make us toss him out.  He spent every morning for weeks looking at him like he asked, "Is this the day when you get rid of me?"

At the end of that first week, he climbed into my lap for the first time and placed a couple kisses on my chin.  That same night, John told the president of Oasis that we wanted to adopt him.  We did the next day.

After a year, he's more secure although he still gets anxious that someone will take him away.  Something about boys freaks him out and he doesn't trust men; based on a few things, we think a kid and/or a man abused him.

He's now at home enough that he moves off the spot in the bed; we know he wants his head covered and that he'll burrow under a pillow or blanket.  Like me.  And he hates mornings; try to get him up early and he burrows further under the covers.  Like me.  ;)  And he orginally was still concerned that we weren't keeping him that he let me put hats on him.  Not anymore. :-)

He loves the ladies, even though he's fixed now. Doesn't matter if they're 5 times his size either.  He gets a swagger and Latin lover attitude and he sidles up a "lady" that's just hysterical to watch.

He snores like a truck driver and even wakes us up sometimes.  A couple weeks ago, he woke up Casey and she gave him the filthiest look.

If he trusts you, his favorite spot to be petted is the side of his neck.  He'll come up and lean it towards you.  With John and I, he climbs up so he can press it as close to our faces as possible to be nuzzled there.

And one of the funniest,  incredible things about him is his need to take things of mine and stash them in the dogs' "cave": underneath our king size bed.  To date, he has taken:
It's been a heck of year with our snoring, Don Juan bandit. A fun, loving year.

A group of Christians have stated that May 21st, 34 days from the day I'm posting this, is Judgment Day, the End.  I'm not going for a flame war over beliefs and religion, I'm just curious.  What do you think? What I'm really interested in hearing is if you consider yourself a devout Christian and you say No; not because the Bible doesn't give a date, but for another reason.

So if you are devout and you say "No" for a different reason than the Bible doesn't give a date, what is your reason for saying no?
Posted by Erin at 8:50 PM No comments:

Email ThisBlogThis!Share to TwitterShare to FacebookShare to Pinterest
Labels: Judgment Day, May 21 2011 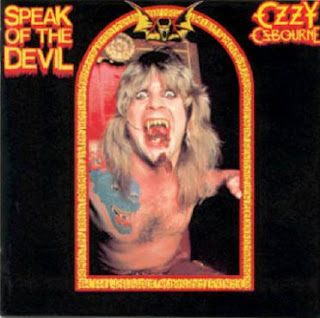 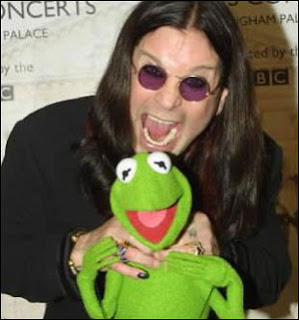 Man, I want one of these!  So far, he's only sold in Hong Kong, but there's a lot of demand for him in the US, so I hope Disney brings him here soon!

Everyone has cell phones now.

We don't know how we got along before them.  So here's my question: why can I STILL not get a hold of anyone?