Because we gave them a bath. :)

Rico is actually very good in the tub. He quietly stands there until he's done and you take him out.  I washed dogs and John dried them, so Rico was quite happy when he was handed over to be tousled fluffy and dry.

Daytona looked like I betrayed him, but stood there as long as you kept a hand on him. Just like Morgan, if you didn't have a hand on him, and he figured bath time is over, Hallelujah!  When we dried him and he dried himself more, he became 5 times more shaggy!  His mane fluffed out to epic proportions and he became something from the Lion King on Broadway, except he didn't need a mask.

He looked and dried himself like this dog in the video, except he didn't yell at us.  Just looked like we had utterly failed his faith in us. They did need a bath though, just like this little guy.

Am I the only one who thinks the guy with the camera sounds like Jim from The Office?

Elphie, as always, treats a bath like she's being waterboarded at Gitmo. It's constant wrestling and cries of horror and near escapes. I always end up as wet as the dogs when it's time for Elphie's bath.

She avoided even me for quite awhile in case I thought she needed another rinse cycle. John, on the other hand, was the big hero since he was the one who got them OUT of the bath and dried them off. He played this up to, petting them and whispering soothing things like, "Your mom hates you. I told her not to give you a bath."

Seriously, imagine if we had kids.
Posted by Erin at 4:12 PM No comments:

"Frozen" is a must see! So is the Mickey Mouse short with it!

"Get A Horse" is amazing animation! This new Mickey Mouse short starts off with a classic 1930s look for Mickey and it brings back all his classic buddies with him. Then Disney literally blows out the screen to bring Mickey into the modern world. John and I saw this in 3D which gave this an even more fantastic level. Not only does Mickey interacting with his B&W world given great contrast to his color, 3D self, but the 3D is amazing! Several times it felt like the characters really were coming in over our heads or right in front of us. And big brother Oswald has a cameo! Director Lauren MacMullan and her team made a masterpiece!

But she went one more step to be truly amazing: she uses Walt Disney's recordings to once again play his famous alter ego. That's right, Walt Disney himself plays Mickey Mouse one more time!

I can't applaud this enough. It's true Disney all the way through and I hope this is just the beginning for much more like this. Maybe even a Mickey and Oswald movie? (Followed by a ride in the parks.) Please!

This started the night off perfectly for Frozen. This film embraced Disney classic with modern movie; several times, I caught myself going "wow....." Animation is top notch and the best yet. I could go on for paragraphs about it, but it simply is mind blowing so many times. There's not a frame that's not beautifully done.

The characters and their music: a new Disney queen and princess! Idina Menzel as Elsa blows away the audience with her acting and singing. Kristen Bell has more of the comedy as well as the heart in the movie.

I really want to see this again in the theater to get the full effect on the big screen, but it's one of those films where I know immediately I'm buying the Blu-Ray as soon as it comes out.  And like Tangled, I will actually agree with John that we need at least a 72" HD TV. A 3D one, preferably.

I simply can't wait to see what they do in the parks for this film!

Walt, I believe, would be very proud. 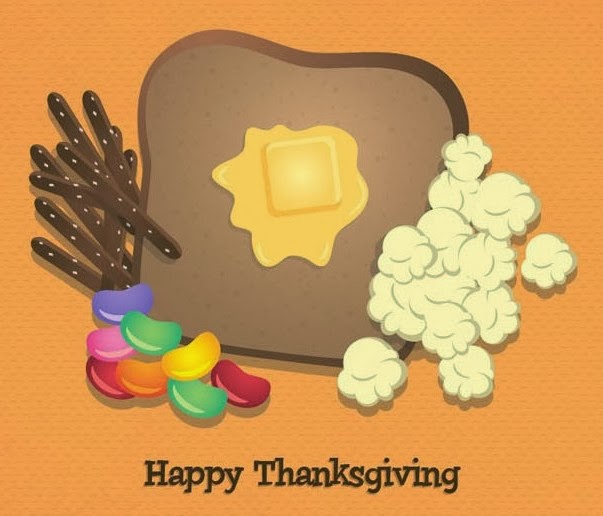 Best Thanksgiving graphic ever!  Made by the wonderful Jerrod Maruyama! He continues to amaze me with his art at WonderGround Gallery. Now I find this fantastic image representing a big part of my childhood as well.  Thank you, Jerrod!

I include this next one because it reminds me of people who say to me, "What do you eat on Thanksgiving if you don't eat turkey?"  Answer: everything else.

In fact, for all the people who insist to me that they are carnivores, you can eat the turkey and I'll eat the rest of your dinner since it's not made of meat.  :)

I can't believe it. I had hoped to meet her.  I have the book she wrote about her father and I hoped I might get to see her someday & get her autograph.  I wanted to tell her how much her story meant to me as well as everything she fought for on her father's behalf in the Disney company.

Now she's gone. Who will fight for those things now?


You've probably already seen this, but in case you haven't or you haven't seen it for a few weeks, you have to check this out. Disney Villains do a version of Chicago's Cell Block Tango.  Brilliant!


This is NOT an amateur video and it shows. This is someone who knows theater as well as a love for Disney. And let's hear it for Disney for gleefully letting this go viral.

Each one of these is brilliant, but I have a special liking for substituting the Hungarian with Disney character names spoken as a foreign language.That is ultimately clever.
Posted by Erin at 1:55 PM No comments:

Thank you to all the men and women who have served this country. May we always treat that promise to serve with the deepest faith to only put our own in harm's way out of absolute necessity.