I have never seen anything like it before.  We were at Toni's Treats in Malaga and I saw it parked there. I had to take pictures! 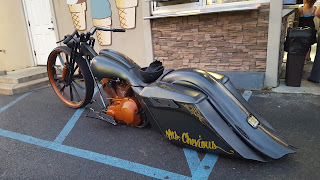 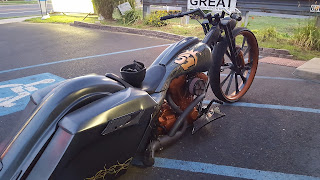 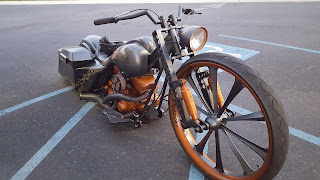 Email ThisBlogThis!Share to TwitterShare to FacebookShare to Pinterest
Labels: motorcycle

Eight years with no mom.

That doesn't sound like a big deal, if you haven't lived it yourself. If you have lived it, you know.

It's more than a big deal. It's huge and painful and sad.

It's hitting me harder this year than last year; it hurt then too, but it's more of that hollow ache that drags you down this year. I don't know why.

Whatever the reason, I hurt. A lot. I want everyone and everything to go away. I can't think of the work I have to do, which makes it harder and adds to the urge to shove it all away. I just keep thinking about it and wishing.

What if the doctor was right and she wouldn't have died if she hadn't taken me out for my birthday?

And why didn't I take a few seconds to kiss her goodbye before running out of the car?

Why didn't I understand what the other doctor was telling me?

10 years! RiffTrax is 10 years old! Can you believe it? Not to mention here we are for the Mystery Science Theater 3000 Reunion show! They have the theme playing with the RiffTrax slides that use backgrounds from MST classics like Mr. B Natural. Now a song fro Werewolf and then a Patrick Swayze Christmas!

I miss when my friends used to come to these with me, but I'm here! I would never miss it! And I'm already enjoying myself. 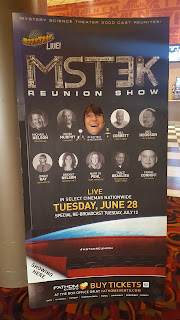 
Something happened and I need to talk about it.
I have this geese family where I work. They even come up to the windows the other day.  They’ve been living by this other pond so they hadn’t been here to my windows until this week.

Last night, on my way home, this guy in a pickup truck deliberately ran over the dad. I think it was the dad, based on his position as they walked.

Deliberately ran him  down.  The little family was almost across, it would have just been seconds, that’s all.

And the dad didn’t die right away. He kept struggling to get up, but kept failing. He called to his family and his mate kept being torn about going to him. When he was nearly gone, and cars were moving, she finally left and moved the babies back out of the way. She kept calling to him.

A few of us moved our cars in so no one else could run the remaining family down.  Then I pulled my car over to get to him, but someone else did too and picked him up. He died in her arms.

I keep seeing him struggling and calling to them. The terror in the mom. The babies all upset and confused.

I keep thinking that I should have cut into the other lane to get past the cars in front of me, and gone after the guy. I don’t know what I could have done, but something.
Posted by Erin at 11:27 AM