To take on making a spoof of Game of Thrones, when you are SESAME STREET, and you pull it  off brilliantly? That makes you gutsy, clever, and a lot of fun.

Kids will see a cute story involving counting, music, and Grover being Grover.  Adults who are fans of the books and show will laugh and do spit takes.

So here it is. Sesame Street's Game of Chairs. Be sure to notice the fantastic details like the Iron Throne being made of golf clubs instead of swords. It even has the map!

Posted by Erin at 12:03 PM No comments: Links to this post

Who is that behind those Foster Grants... and scarf and hat...

Someone at my office just joked that it's getting hard to recognize me being all bundled up and the sunglasses on.  ☺ 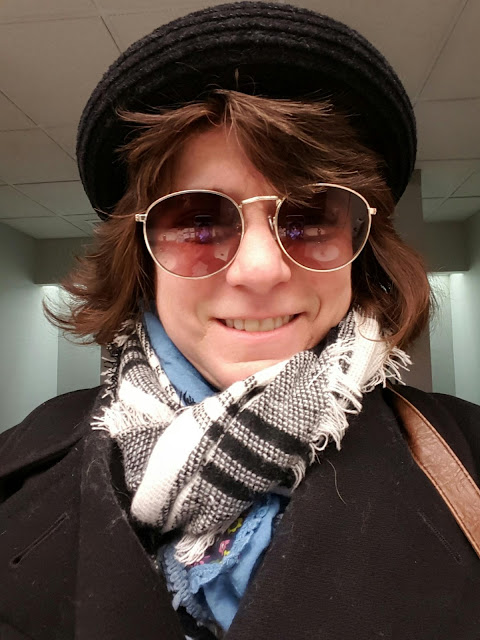 Posted by Erin at 1:15 PM No comments: Links to this post

Email ThisBlogThis!Share to TwitterShare to FacebookShare to Pinterest
Labels: winter

I had a friend, a very close friend. We were friends for nearly ten years. Then one day, she simply disappeared. She didn't answer emails or phone calls; it was like she simply no longer existed. I have tried to figure out what happened; I looked back at our emails, I've gone over things that were said right before she "took off", and I can't find a thing.

I found out she was Mormon; I always knew she was religious and how important that was to her, although I didn't know exactly what church she belonged to. I have no idea why she hid it or if it has anything to do with her no longer talking to me. I don't see how it could be about faith since we were friends all those year, and differences in spirituality had nothing to do with it.

It wasn't just me. She disappeared from two other friends and they don't why either.

I've only heard from her once: last year, out of the blue, she contacted me because she wanted something and then she disappeared again once I helped her out.

I miss her so much.

I obviously miss the person I was friends, not this new person who only talks to me if she needs something and can't get it any other way. I could tell her anything, ANYTHING, including the darkest parts of me and she did the same with me.

And then there was the part of the friendship that dealt with our writing.

No one fills that place. Putting aside the friendship, she told me what worked -- in detail -- and what didn’t. She strengthened me. Her feedback and discussions were amazing just from her knowledge and literary degree alone. I couldn’t have written Cain without her. Just her even keeping me going when I didn’t think I could made things happen; some of the ideas in all of my stories came from her ideas and helping me with the development.

Now I get from friends: "liked it. When’s your next one?" And I have to drag even that out of them. I just asked each of them a question as I wrestle with something. Neither of them got back to me and it was a couple days ago, but I know they're okay. It's not that keeping them from answering. It's just not what they do.

If my other friend was still around, I would have gotten a detailed answer.

If she was still around, Heroic Era, my original novel, would be finished instead of sitting there as a dusty, first draft.
Posted by Erin at 10:56 AM 1 comment: Links to this post